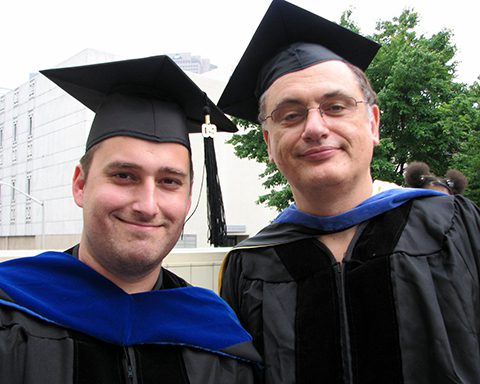 After graduating from Georgia Tech in 2001 with an applied mathematics degree, Kelly Westbrooks did not have much of a plan. But he did know that he wanted to do something more interesting than the programming job he landed after graduation.

Kelly began his career as a software engineer at Digital Insight (now part of NCR). It didn’t take long for him to realize that, although he enjoyed programming, he really wanted to write code that did more than what he calls “putting databases on the web.” He decided to pursue a graduate degree in computer science, but lacked some of the prerequisites. Discovering that Georgia State offered undergraduate CS courses in the evening, he enrolled as a postbaccalaureate student. After a few semesters, Kelly was accepted into GSU’s M.S. program in computer science.

It was during Kelly’s design and analysis of algorithms class that he met Distinguished University Professor Alex Zelikovsky. Under Dr. Zelikovsky’s supervision, Kelly completed a thesis on applying flow networks to a problem in understanding the structure of intracellular signal transduction networks. Upon completing his M.S. degree, Kelly decided to continue his work in bioinformatics as a doctoral student. Again under the advisement of Dr. Zelikovsky, Kelly wrote a dissertation on using high-throughput sequencing data to reconstruct the genetic sequences of viral quasispecies.

After receiving his Ph.D. in 2009, Kelly went to work at Life Technologies (later acquired by Thermo Fisher Scientific), writing software for their next-generation DNA-sequencing instruments. He left Life Technologies in 2011 to join Google, serving on the technical infrastructure team and then the Google Genomics team before returning to the technical infrastructure team. There, he helped design and build a large integer linear programming (ILP) solver for scheduling data center machine deployments and decommissions. “I was well-prepared to work on this project, owing to the fact that one of the most important skills I learned as a graduate student was how to design ILPs for solving problems in combinatorial optimization,” Kelly recalls.

In 2018, Kelly joined Theorem, where the small-company culture appealed to him. “Although working at a large company like Google had its perks, I really enjoy working at a small company much more—it gives me the opportunity to have a direct impact on the company's bottom line,” he explains. With only 32 employees, Theorem is the ideal spot for Kelly to explore his role as a top technical authority. “You get to have a profound impact on the company culture itself—the decisions you make today about the engineering culture you want will have huge ramifications in the future as the company grows and becomes more successful,” he says. Despite fears of how the economic stress of the pandemic would affect consumer lending and capital markets, paired with the difficulties of moving to a 100% virtual company, Theorem has prospered during the pandemic.

Kelly lives near the beach in Montara, California, with his wife, Vanessa Bertollini, and their two sons, Haskell (9) and Lex (7). Vanessa is also a Georgia State alum with an M.A. in sociology.

Send this to a friend