I’ve held several industry positions prior to returning to obtain my B.S. and later Ph.D. in computer science. In one of these positions I worked for several years as an electronics bench technician repairing components from slot machines and video lottery machines. While doing this, I designed and implemented various testing routines to find intermittent communication errors between networked devices within the machines and between them. During this time I developed a deep appreciation for electronics hardware and the complex interactions between various components that we tend to take for granted each day.

I later spent time as an electronics manufacturing process technician programming robotics equipment for the manufacture of electronic billboards and stadium video/scoreboards. It was during this time, while I was teaching myself to program robotics equipment and build their runtime data warehousing and display routines, that I developed a desire to obtain a formal education in computer science. Since that time, and largely because of those early experiences with data collection and warehousing, I have focused my interests on data science and analyzing data to solve problems that have real-world applications.

My current and former research has consistently focused on data-driven solutions to the problem of space weather prediction. In my thesis work, I focused on utilizing representation learning to produce region of interest descriptors for regions of images. These were specifically applied to images from NASA’s Solar Dynamics Observatory (SDO) to provide a fast and accurate means of comparing regions of interest that are quite similar to one another. This research was for two applications: (1) as a means to produce an indexable descriptor of image regions that can be used to implement a content-based image region retrieval system for the SDO repository, and (2) as a means to compare event reports from two different reporting periods so that the most similar can be linked to its matching report in a later period, i.e., for multiple-hypothesis tracking of solar events. The tracking of solar events is then used as a preprocessing mechanism for spatiotemporal frequent pattern mining on multiple different solar event types in hopes of finding patterns that lead to solar flares and coronal mass ejections.

My current research focuses on utilizing time series of several solar magnetic field parameters within regions of interest to predict whether a specific solar active region is going to produce a solar flare or not. This currently takes the bulk of my research time, as the Data Mining Lab is currently contracted with NASA to produce a system to do just this. I also currently work on producing data-driven surrogate models for simulations of various physical phenomena, such as the ambient solar wind. The goal of all these research efforts is produce data-driven approaches to space weather forecasting. 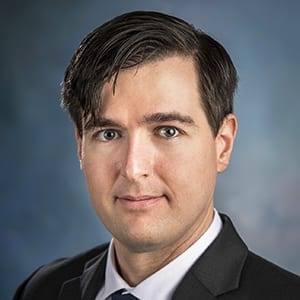